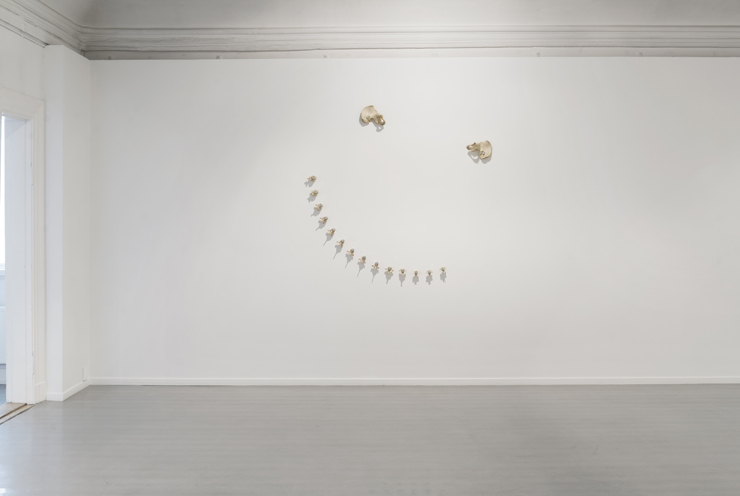 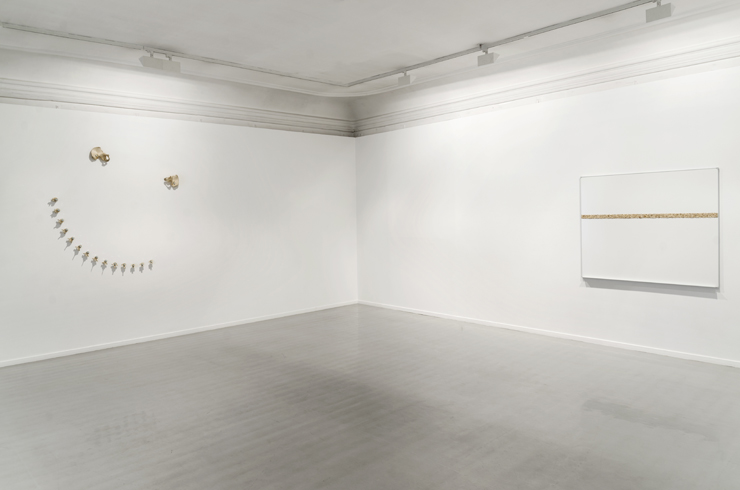 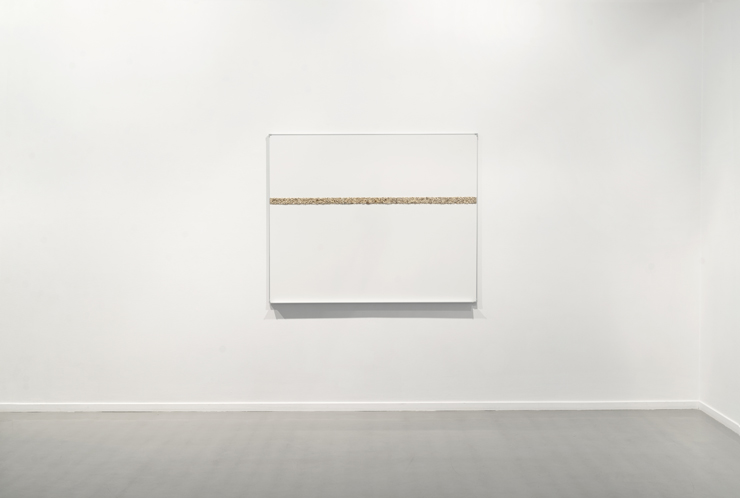 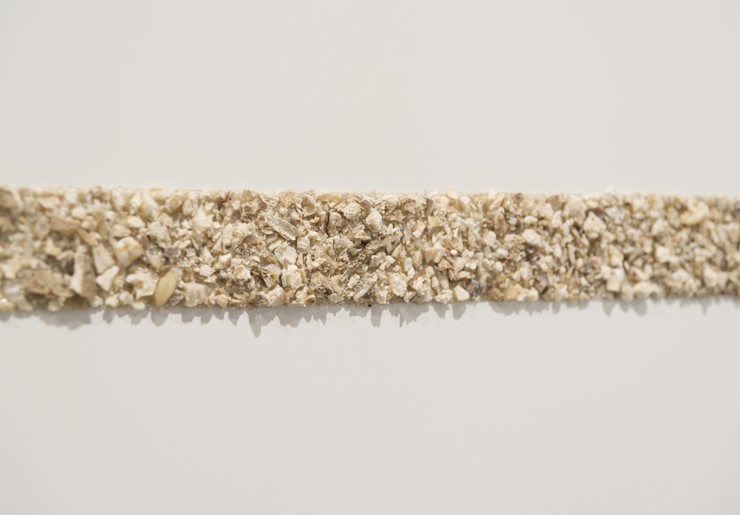 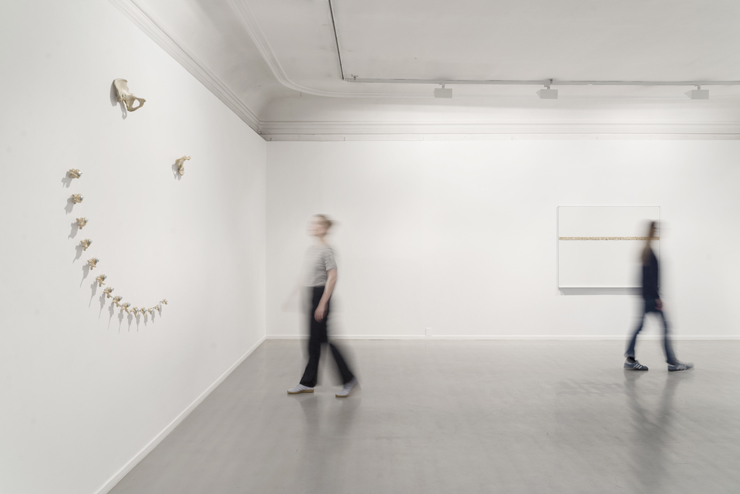 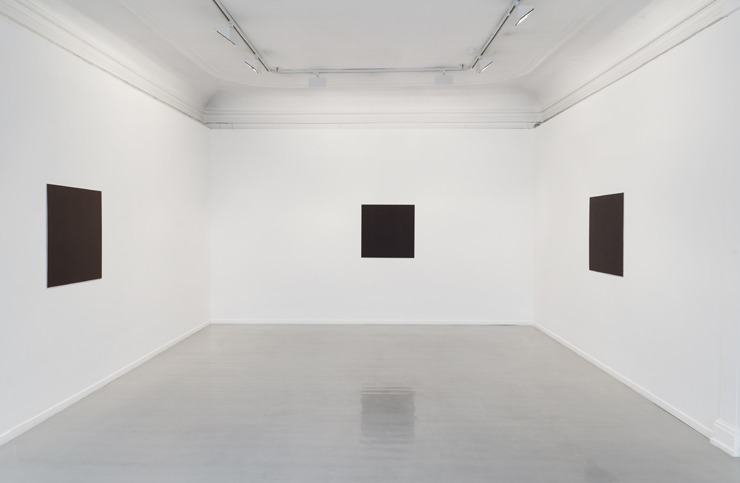 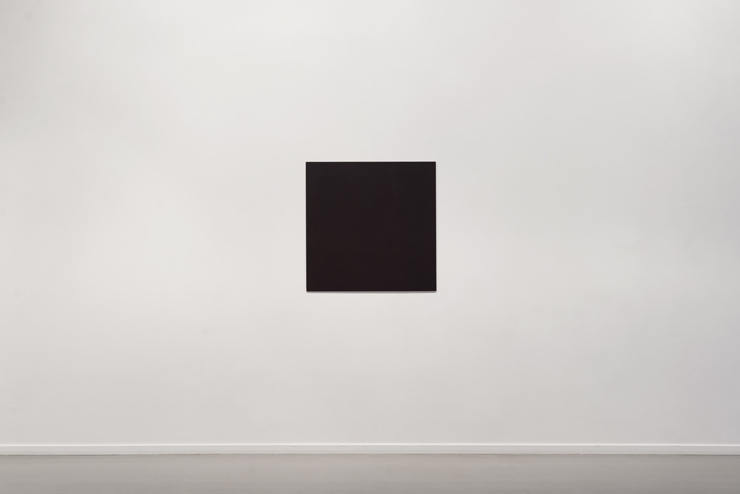 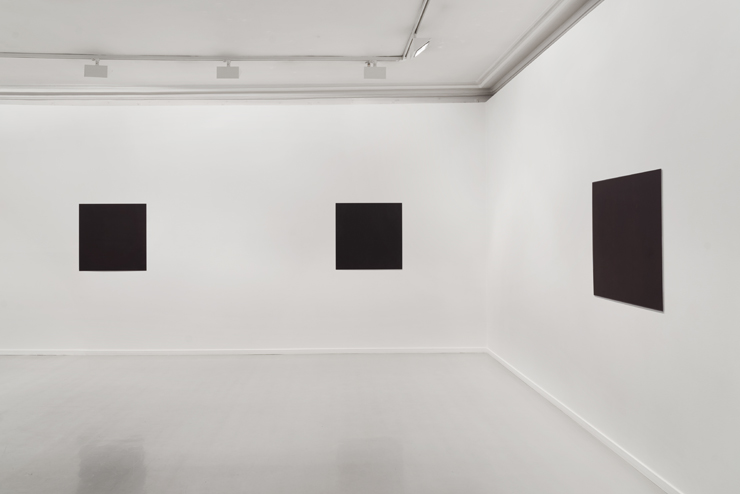 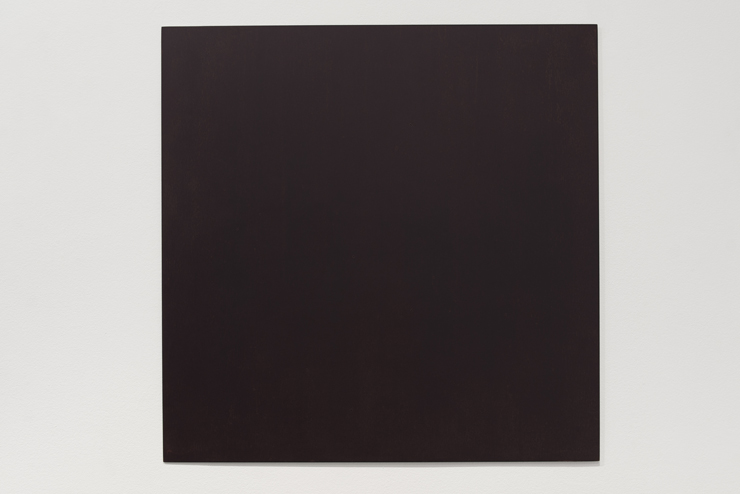 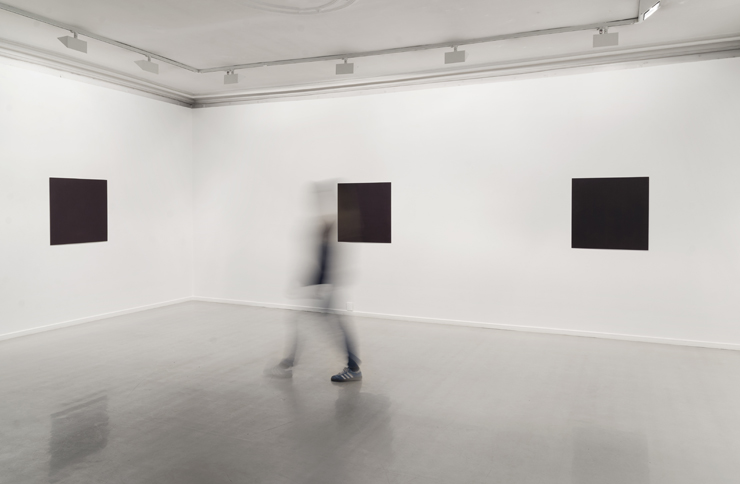 «Seven Monochromes and a Smiley» is a series of object based works in which the human body is not only represented but included in a fragmented, anatomical manner. Blood powder constitutes the main material in the monochromatic series ”Are you in pain… Not anymore”, while ”Whiteboard” and ”Smiley” are comprised of bone and skeleton.

”Are you in pain… Not anymore” (1-7) is based on the format 79,5×79,5 cm in reference to Kazimir Malevich’s ”Black Suprematic Square” from 1915. Wallin has applied layers of blood powder on the aluminum, which is then polished down to a slick surface. From a distance the works appear as modernistic dark monochromes, but Wallin’s monochromes invoke a different kind of darkness. The contrast between a symbolically loaded material such as blood and a seemingly clinical format results in both a figurative and literal connection to the human body.

Through his use of both subtle seriality and direct confrontation, Wallin’s work represents physicality in its rawest form–something the viewer might feel the presence of in their own body. Particularly when standing in a building, which among many other functions, has a history as a garrison hospital with an anatomical theatre affiliated with it (ref. Anatomigården).

Since the mid 90s Magnus Wallin has worked with film. His animations, wherein skinless bodies undertake challenges in timeless rooms, are considered to be pioneering. Popular culture and art historical references are woven together and reveal how ideological values often dictate our relationship to the body.

Wallin started his career as an interaction and installation artist, creating visceral, psychologically charged situations and environments. Later on he started to work more with sculptural objects, always with the human body in focus. In 2014 he made his first large scale presentation of object based works at Kalmar Konstmuseum in Sweden.

In Norway, Magnus Wallin has shown at the National Museum of Art, Architecture and Design in Oslo (2005, 2011), Vestfossen Kunstlaboratorium (2005, 2008) and Kistefos-Museet (2007). Internationally, he has exhibited at the Venice, and Istanbul biennales (2001), the first International Contemporary Art Bienalle in Sevilla (2004), and at a number of museums around Europe, in Japan and USA. He is represented in the collections of among others Moderna Museet, Stockholm; Uppsala Museum of Art; Norrköping Museum of Art; Dunkers Kulturhus, Helsingborg; Kistefos-Museum, Norway, the National Museum of Art, Architecture and Design, Oslo and Contemporary Art Museum Construction, Kanazawa, Japan. He is represented by Galerie Nordenhake. Magnus Wallin lives and works in Malmö, Sweden.

«Seven Monochromes and a Smiley» is Wallin’s first solo presentation in Norway. The exhibition is supported by Iaspis.